On my third day in Madrid, S took me to the school where she teaches English to meet the kids and learn a bit about Spanish culture outside of Manchego and Zara. Normally, children scare me, but, assuming the smell of my fear wouldn’t translate to Español, I walked into school armed with holas and smiles.

My visit was clearly the most exciting thing that had happened to these children all school year, and what ensued resembled a press conference, if all the reporters were 3 feet tall and spoke broken English. Over the course of the day, the kids practiced their English by asking me numerous important questions, such as “Do you, e-watch, American futbol?” (Only when forced), “Do you, e-live, in a skaper [skyscraper]?” (Not really but my twelfth floor residencia still seemed to impress), “Do you, e-have, American boyfriend in Nueva York?” (No. I mean, YES. Damn it you unnaturally coy nine year old) and “Do you, e-like, the e-Statue of Leeberty?” (She’s cool, but when I was six my parents made me ascend to her crown by foot and captured the resulting temper tantrum on VHS, so sometimes when I catch a glimpse of her in the skyline I have flashbacks to when stomping my feet and tearing the pom-poms off my hat always got my way and angrily wish it was still so).

Despite not counting the fact that I had never felt more like a celebrity, the visit to school was one of my favorite parts of my trip because it exposed me to a part of Madrid’s culture I never would have gotten to experience without S. Also, one of the little girls gave me a kiss and another one drew me a picture, making me think that perhaps children aren’t just frustratingly stupid mini-adults but actually adorable and interesting creatures that I will make more of an effort to not run away from when I encounter them in America. Maybe.

[S and I with her class at Colegio Rayuela]

In addition to introducing me to some super cute niños, S and her roommates took me to several fabulous watering holes in the city. Highlights included a lounge called Areia Chillout--beds and cushions lined the dimly-lit space, and we enjoyed mojitos and pillow fighting as couples casually reached third base on surrounding couches, and Ojala restaurant, where guests enjoy tapas seated on a floor made out of sand while a projector plays Disney’s The Jungle Book to the sounds of gentle dubstep. As you read this, you may wonder what Spanish drogas I ingested to imagine a venue like this, but I swear on my sparkly picture from Ana and all my souvenirs that it really exists. Not only that, but I think I’d like to get married in this place,(with The Little Mermaid looping instead, obviously. Ariel was the best Disney princess by far. Challenges accepted). Also, as I write this, I realize that we spent a disproportionate amount of our social time in Madrid lounging on the floor of public spaces, which I am hugely comfortable with.

[The scene at Ojala] 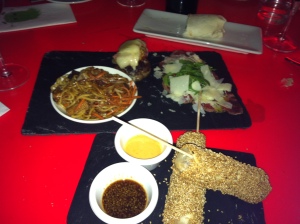 [Just loungin. Wearing a dress was probably a seriously terrible decision for this activity]

Madrid’s a city I would love to return to in the summer, when the streets fill with block parties and the parks teem with couples and sunbathers. Many thanks to S, M & A for hosting me–you are all officially invited to my big fat Spanish wedding. 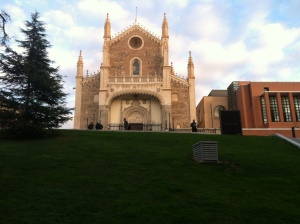