According to Cady Heron, “Halloween is the one night a year when a girl can dress up like a total slut and no other girls can say anything about it.”

In past years, I have been inclined to agree. Allow me to demonstrate:

I immediately regret putting those on the internet.

However, let them serve as a testament to a woman reformed. This year, while brainstorming Halloween costumes with my friends (hometown heroes? assorted Lady Gagas? Disney good girls gone bad?), I came across the below image… 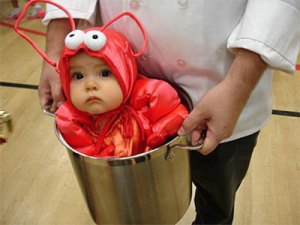 …and promptly decided that I will not settle for anything but an exact adult-size replica of this  Halloween costume.

Unfortunately, extensive Google-ing proved that such a thing, despite being an absolutely genius idea, simply doesn’t exist on the world wide web. Thus, dear readers, I am enlisting your assistance.

I need a Halloween costume as wonderful and deliberately unsexy as this baby in a lobster pot. I have come to terms with the fact that I will probably not look quite as cute as this baby, but I am willing to take on a challenge.

Rules and restrictions: No sewing, international shipping, or hair dye. Wigs are fine, as is scotch tape/safety pins in lieu of needle and  thread. Edible costumes encouraged.