I had a lot of fun playing dress-up in Katniss Everdeen and Megan Draper’s closets, so I thought I’d give it another go with the baddest betches on HBO, the cast of Game Of Thrones.

If you do not watch Game Of Thrones, here’s a brief plot summary: Winter is coming. All the characters are plotting to kill each other. Don’t trust anyone, even your sister (even though you’re secretly hooking up with her and fathering her children), your son (because, you know, he might be a little upset when he finds out), your boyfriend (because he may decide, on a whim, to cut off your father’s head), your brother (although if he crosses you again you will kill him via pouring molten gold directly onto his skull), or your random midget relative (I guess you can trust him. He’s far too busy sipping on sizzurp and getting it on with all sorts of babes from far away lands to be much of a threat).

I think the plot goes into more detail in the books, but that’s about all I could muster from the TV series (just kidding. Game of Thrones is great. And oh, spoiler alert).

There are many ridiculously bad-ass female characters on Game of Thrones, so I’ll start by raiding the wardrobes of two of my faves:

Claims To Fame: Looks hot riding horses through the snow, stood by husband when he was beheaded, wears so much fur I’m surprised PETA isn’t attempting to full-on drown her in flour.

[Cape: Alexander McQueen, Skirt (One day I will have an occasion to which one can wear this skirt): Haider Ackermann, Leather Vest: Givenchy (H&M makes a similar version for about 1/20th the cost, but she is a Lady, after all), Coat: Karl Donoghue, Shoes: Belle By Sigerson Morrison (50% Off), Earmuffs (Winter is coming, after all): Juicy Couture, Confession: I Own These Earmuffs, Purse: Modcloth, Bib: Jennifer Loiselle]

Claims To Fame: Heir to the Iron Throne, Once feasted on horse heart,gave birth to 3 dragons (and somehow totally lost all that baby weight by Season 2) 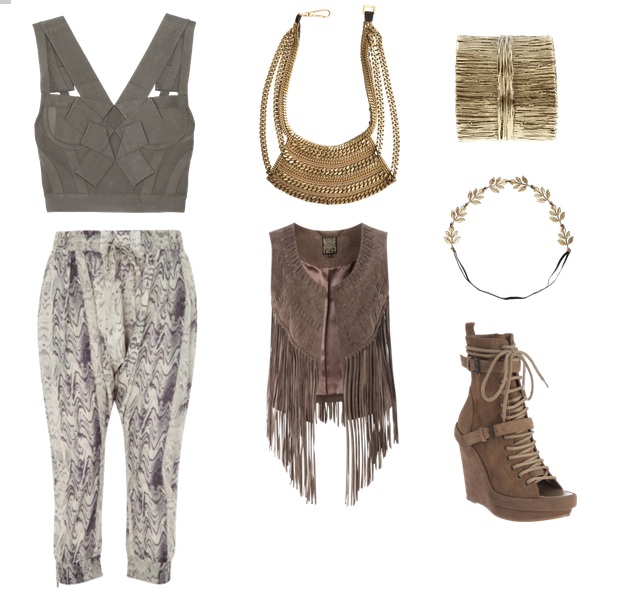 [Crop Top: Herve Leger, Abs: Srsly Khaleesi what do you do? 8 minute abs is not having that effect for me, Harem Pants: Iro, Necklace: Calypso St. Barth, Vest: Biba (48 Euros. Mine), Cuff: Aurélie Bidermann, Headband (Games of Thrones biddies love their headbands): Eddera, Boots: Ann Demeulemeester (Say that five times fast and you officially win the Game of Thrones)]

Off to pretend the internetz is my closet and feed my pet direwolf.